When I built my 2200G PC, I used a 4TB drive I won from TechSpot. The Windows installer initialised the drive to MBR, which meant that only 2TB were available. Since I felt that 2TB is enough, I decided to leave that alone at the time.

For those who don’t know, MBR stands for Master Boot Record. It’s an old way to mark where partitions exist on the disk. The newer format is GPT, GUID Partition Table. It not only allows for drives larger than 2TB, but is also more robust, because it stores the partitioning information in more than one place. On the down side it requires a newer PC, with UEFI support (instead of a basic BIOS) and a modern OS (Vista x64 or newer). These aren’t really problems with PCs from the past 10 years or so.

Windows Disk Management can’t convert a drive from MBR to GPT unless it’s empty, and most of the tips Google found were either irrelevant, hard to do or directed to ‘free’ software which didn’t include the functionality in its free version.

Which is why when I finally found the simple solution I figured I’d post. Google did find it, it’s just not the thing that pops up immediately and depends on the search.

Anyway, the solution is MBR2GPT, which already comes with Windows 10. It’s a command line program and it does the job well. Here’s a detailed explanation of how to use it:

That’s it. Really simple and worked fine for me.

Unfortunately the 2TB Seagate Barracuda in the Phenom II PC died. That had all the videos I recorded on it, many of which I wanted to upload in the long run. Things like the ASRock BIOS and its update procedure, A8 9600 benchmarks, and of course a lot of 2200G stuff. Plus other unrelated stuff.

Of course, none of it was backed up.

This obviously puts a dent into my plans to create a useful blog and YouTube channel, something that already became harder recently due to having even less time for it than before, and with this setback became even harder.

Remember that PC whose RAM I wanted to upgrade? I did that this weekend, but first had to clean it. Here are the before and after pics: 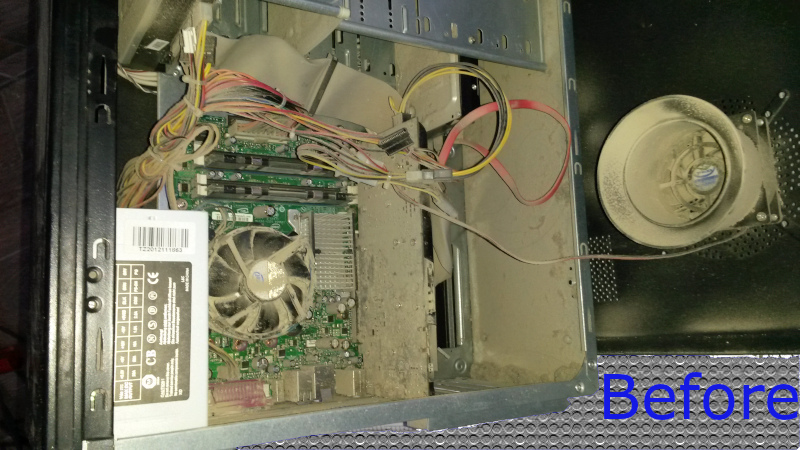 Not perfect, but I didn’t want to disassemble it. Vacuum plus wipes plus compressor then vacuum and wipes again.

So PC had its bath, had RAM upgraded from 2GB to 6GB (unfortunately I didn’t find all 4 2GB DIMMs I had, so made do with 2x1GB + 2x2GB). Also got a new DVD drive (I discovered when I tried to run MemTest86 that the drive wouldn’t open). Now it has another 10 years ahead. 🙂

I carry a phone on me most of the time, but sometimes I leave it behind (such as when I’m with my family) and I often forget to charge it. I’m just not that much of a big phone user to care (I guess my age is showing).

Problem is, when my phone dies or isn’t with me, I’m much more limited these days than I was in the past, because even if I have another way to go on the internet, such as a PC or my wife’s phone, at some places (such as Gmail) the only way to verify my identity is my phone.

Valve recently said that it will replace Greenlight with Steam Direct, a method by which developers pay per game to get it on Steam, and (presumably) get the money back if the game sells well.

The problem is that making a decent game isn’t enough to get sales, and that developers with little up-front money could have a hard time getting in if the fee is high.

Valve is asking the public’s opinion about the fee (a range of $100 to $5000 was mentioned), and already there’s reponse of people willing to pay for other devs. This, in my opinion, is the right way to go: put a high monetary barrier, and allow others to function as curators. This means that games liked by others get in, and those without fans will have a tougher time getting in.

But why not have Valve integrate this ability into the process? Why not keep something like Greenlight and allow it to be used in a sense like crowdfunding, allowing others on Steam to pay for the game to enter the store? Having this as part of Steam is better for Valve and for Steam than having it all happen outside of Steam, because the path for developers will be clear, Steam users get involved, on Valve’s turf, and Valve helps make a contribution towards indie development.

In particular, curators could be made into editors and publishers, putting their money where their mouth is and helping get the games they’re interested in onto steam.

Read on for more analysis and details.

END_OF_DOCUMENT_TOKEN_TO_BE_REPLACED

Last time we added some object interaction. I’m not finished with that yet, so I’ll add some finishing touches to this floor, and then let Eric go down to the base floor. But what I really want to get to is to have Eric meet someone.

END_OF_DOCUMENT_TOKEN_TO_BE_REPLACED

Some month ago I started playing with RPG Maker VX Ace. I’ve wanted to create a game for a long while, but lack of free time makes it hard to do something complex, so I decided to try what I hoped was a simple tool but good enough to tell a (silly) story.

Jumping into RPG Maker development was a little harder than I had hoped. The standard tutorials I found early on didn’t seem to address what I was most interested in, which was creating interaction rather than creating a world.

I decided to create a small project to learn interaction, and figured it could be helpful to others if I documented what I learned. Unfortunately, as with many things, life and other interests took over (full time job plus little kids don’t leave that much free time), and I haven’t touched this for a while.

Still, I figured I’d still post what I’ve done so far, in the hope that it will help someone. RPG Maker VX Ace is often sold at a deep discount, and is a neat tool for game development, so I imagine that there will always be new users looking for help.

Note that I’m still a beginner. I’ve only played a little with RPG Maker, and what I did is based on my experimentation and what I’ve read on the web. Some of what I write here may not be the best way to achieve the goals. Comments and advice are welcome.

You can download the project containing what I’ve published until now (the first three pages of this tutorial).

END_OF_DOCUMENT_TOKEN_TO_BE_REPLACED

I have a dream of having a tech website dedicated to low end hardware. That probably won’t happen,  but I decided to mark posts which deal with such hardware in a special way.

I don’t use Outlook myself, but a family member wanted his contacts transferred to his new tablet. It took quite a bit of googling to find the easy solution. That solution is called Sony PC Companion. It was obviously meant for Sony Android devices, but it works well as a generic solution. Just install it and tell it to transfer contacts to Gmail and it will do that, including photos. That’s something that exporting to a CSV file and importing to Gmail can’t do.

Debugging crashes is always a hassle. It helps if you can see where the crash happened, and I found it non-trivial until I managed to get all the details. So here’s the short of it, and hopefully it will help someone else one of these days (or me when I forget). Note that it’s assumed that the program was compiled with debugging information.